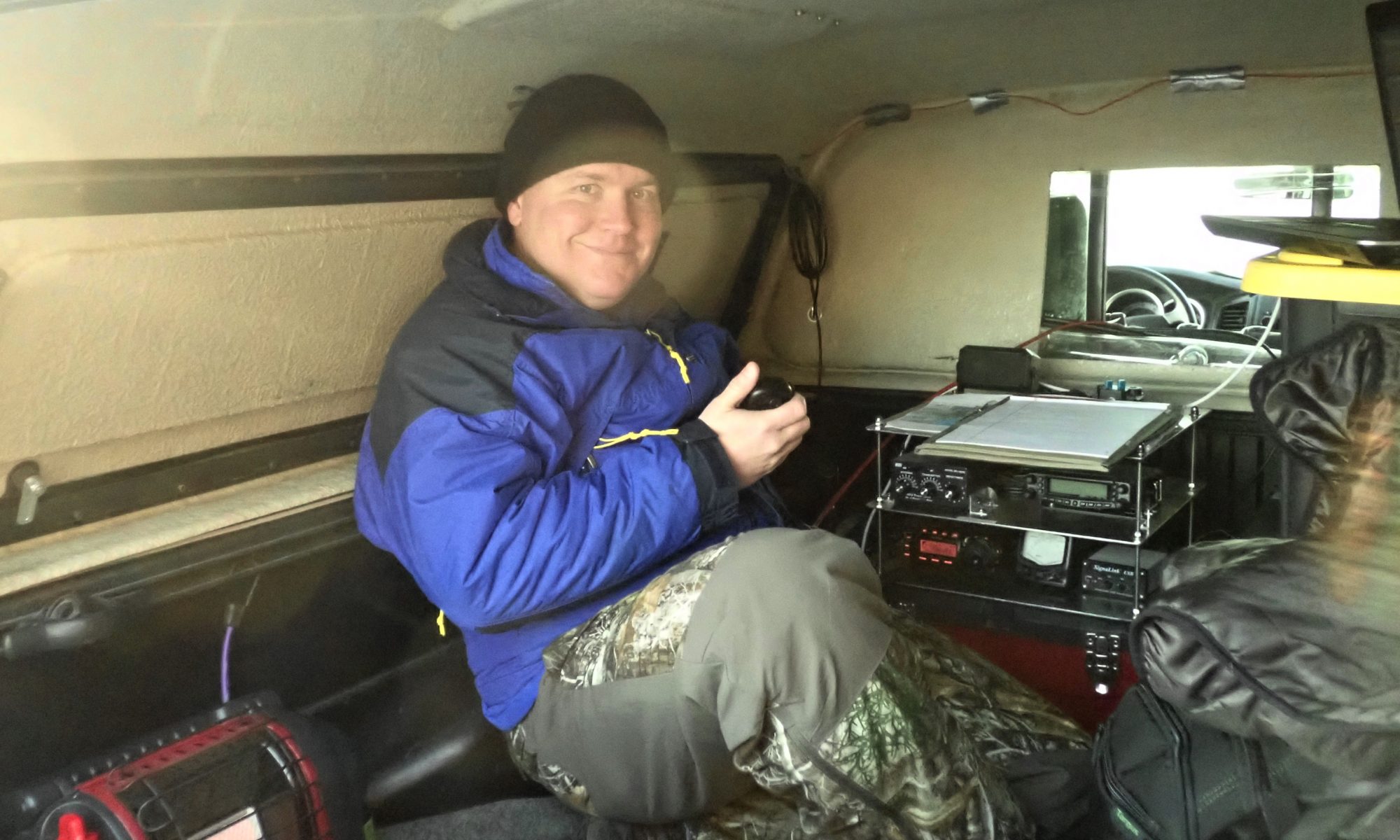 January in Alaska is cold, in case you haven’t heard.

It is also dark. The sun does not even rise until around 1000, so for the January event you are always setting up in the dark. None of this makes it easy to get set up and on-air, but it can be done.

This time around I had in mind a new route. Trips up north to the Mat-Su Valley for BP41 and BP51 had turned out to be more trouble than they were worth. The drive was to long, the contacts were too few, and the locations were too low elevation. Instead of going north I would go south.

From experience I knew that the most productive hour of the contest was the first hour. With that in mind I made sure that I started at my best location: the corner of Alpweg and Meadow in the hills above Anchorage. Grid square: BP51

Although I was using the same antennas and coax outside, my station inside the cab had evolved. My power supply was routed the same as before, with a tie-in to the car battery feeding a power pole distribution block, and that feeding the radio and inverter. I had taken the power pole distribution block and inverter and mounted them in a simple aluminum and stainless steel structure to keep everything together.

The radios had also been relocated into a similar structure. Aluminum plates served as mounting points for all of the gear, and stainless steel all-thread held the structure together. With the structure being all metal everything was well grounded.

I also switched back to logging via computer. With rig control enabled this made it much faster and simpler to submit logs at the end of the event – no more manually copying log data into the computer after the event.

After the hillside location next grid was BP41, a grid which had given me issues with marginal operating locations when set up at Kincaid park. This time around I used a better site near Point Woronzof. The location is at the end of a runway, just outside the fence by Ted Stevens International Airport.

This location worked much better than Kincaid park. Clear views all around made it easy to reach each cluster of operators: Kenai Peninsula, Mat-Su Valley, and Anchorage.

The next grid has always been a challenging one. BP50 is road-accessible, but is entirely within the Turnagain Arm area, south of Anchorage. No matter where you go there are no good RF paths to Anchorage, where most of the stations are. There are always mountains in the way somewhat. You have to depend on diffraction to get signals around the hills.

The solution for BP50 turned out to be a turnout on the Seward Highway, just outside of Indian. The turnout does not have direct line of sight to anything, but the diffraction works well enough to get the job done. Gain is a requirement though – without some gain and directivity it won’t work.

The last grid of the day was quite a distance away. To activate BP40 I picked a turnout on the Sterling highway, about an hour drive through the snowy mountains of the Chugach National Forest.

By that time the sun was down and I was operating in the dark. The turnout gave good RF paths down into Soldotna and Kenai, but provides only marginal paths towards Anchorage. Still, although the site was marginal I was able to get some contacts in the log, and that’s all that matters.