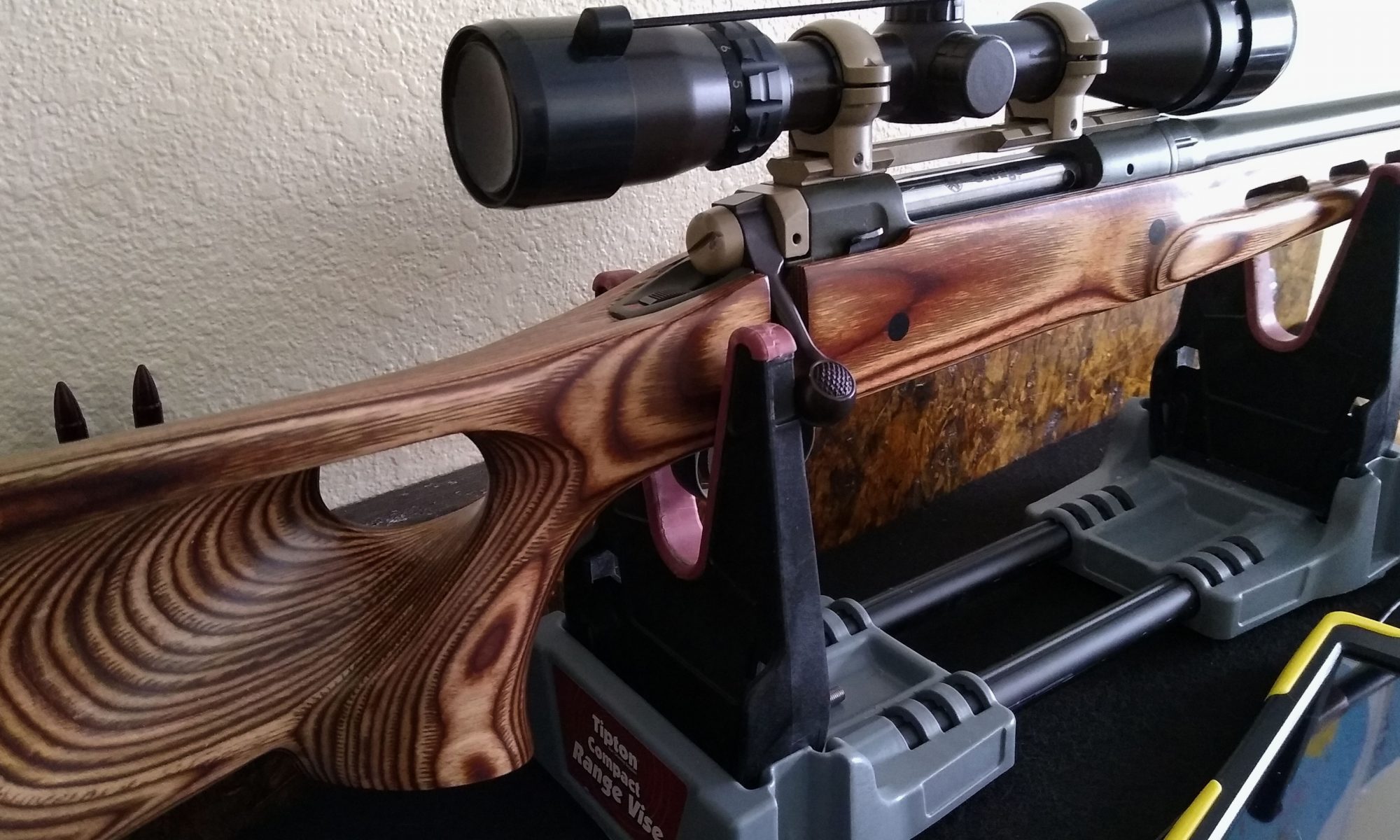 By the time 2019 rolled around I was well-grounded in the shooting disciplines, but had never done any hunting. Alaska has a way of life that rubs off on you, and in the fall the thought came to me, “Why not try it out?”

Being the raving genius I am, I realized that going hunting was going to be rather difficult without a rifle. I’m also a cheapskate, and mechanically-inclined, so I decided to peruse the used gun racks at local shops. That is where I found Conjurer: a pre-accutrigger Savage Model 110 in 30-06 Springfield.

I’ve rarely come across a construction project I didn’t like. However, an entire gun tear-down and rebuild was something I had never done before, and probably did not have the skills to do properly. So . . . I tdecided to do it anyway.

That’s when things got ugly.

I bought Conjurer for the grand total of $250 and it was worth every penny. . . . As in, it had some rust spots, there was no scope, the stock was the older, flimsy style, and the barrel was so dirty I wasn’t sure whether it just needed a cleaning or was pitted.

The first order of business was to get everything apart and check for any obvious issues. Upon removing the stock I found more rust spots, but no serious pitting. Overall the rifle was in decent shape.

These days a group size of 1″ or less is the typical expectation for new bolt guns. I could live with anything under three inches given the age of the gun (estimated at the 1990’s based on the serial number), and lack of any accurizing features.

Before making any changes I cleaned the gun thoroughly, reassembled everything, and mounted a spare scope I had. Range testing was encouraging: groups were in the 1-3/4″ to 2-1/2″ range with factory ammo. That gave me a pre-mod benchmark against which to judge the final product.

With a project like this you have to have a clear idea of where you want to go. Without that you can end up buying components on a whim, changing your mind midway through, and probably will not end up with a good result. You have to know what you want.

My criteria for this project were:

The only parts of the rifle that would remain were the action (bolt, trigger, receiver) and the scope base. The plastic stock would have to go since it was too flimsy for proper bedding. It did not come with a scope, so I would be adding one (obviously).

I would be replacing the barrel with a medium contour version to enhance stiffness and, hopefully, accuracy. I could have changed the cartridge, but decided to stick with the 30-06 Springfield. The bolt head was already cut for this round, so not changing it would avoid any gunsmithing work on the bolt. The 30-06 is also readily available in Alaska for times when I might need to get factory ammunition on short notice. And there was also another benefit.

The 30-06 was designed in 1903 and is not a high performance round by today’s standards. Magnums, short magnums, and ultra magnums all offer more horsepower these days. But there are advantages to this cartridge for the reloader. Modern, low drag bullets offer a significant jump in performance compared with standard designs. Newer powders also allow big gains in velocity without pushing pressures too high.

In short, the 30-06 offers the certainty of finding factory ammo on shelves when needed. At the same time it can also be reloaded for “light magnum” performance with long range capability.

The shooter interacts with the rifle in a few key areas – most obvious of which is the stock. The chosen stock sets the length of pull, wrist orientation, and cheek weld.

For this design I settled on a Boyds Featherweight Thumbhole. The “featherweight” part is a bit optimistic, but it is still a great style, and is lighter than most target style thumbhole stocks. A thumbhole design is anything but traditional on the hunting fields, but they work and care comfortable to shoot.

The laminated design is likewise anything but subtle, but is perfectly stable. That is a big bonus for a stock to be used in Alaska. With temperatures ranging from +80 to -20 you need a stock that will not shift with the weather.

The main drawback to laminated stocks is that they are generally heavy for their size. In comparison to a real wood (not laminated) stock, they are only very slightly heavier for the same volume. Fiberglass or kevlar are also popular all-weather options, but are trickier to work with and are fabulously expensive. Laminate was the way to go with this build.

The metalwork was also going to need some attention. Minor rust had set in and although there was no pitting present Once the barrel arrived I decided to address the rust issues aggressively, by applying a camouflage coating to all the metal parts. And by “camouflage coating”, I mean spray paint. That’s right, bargain basement, white trash, spray can, Rust-Oleum spray paint.

I know . . . the proper way to coat guns nowadays is something like a cerakote or other high end coating. The advantages of those coatings are many, but this was a first hunter’s budget build, so I wanted to keep the cost down. I also wanted something that I could “patch” myself when dings and dents accumulate after a few seasons. This build was a working gun, not a safe queen.

The painting process went well (forgot to get pictures though). I disassembled the entire gun and took all the parts in for sand blasting at a local wheel shop. Once they were ready, everything was hung up on wires and sprayed with primer.

For the top coat I decided to use a technique which I had success with in the past. The general idea is to simply paint each piece a solid color, but make sure that all adjacent pieces are a different color. The end result is a finish that is clearly camouflage (how’s that for an oxymoron), but which is also much more subtle than a typical pattern.

With the metal taken care of it was time to begin the stock work. Remember when I said that the project eventually got ugly. Well . . . .

The first attempt at bedding the rifle did not go so well. The first problem was the pillars. Even though the laminate stock is very stable in response to humidity and temperature changes, I still wanted to make it easy to have perfectly consistent tension on the action screws. That called for pillar bedding.

In pillar bedding you actually enlarge the holes where the action screws pass through the stock. In place of the wood that was there, you replace it with an aluminum cylinder. When reassembled the action and the screws both tighten against the pillars.

The purpose of all that work: aluminum does not shift, swell, or shrink with temperature changes the way wood does. It also does not break down and crush under repeated use.

While I was able to get the pillars epoxied in place, they were crooked. The tiny amount of clearance between the inside of the pillar and the outside of each screw allowed the pillars to tilt in the stock. Once the epoxy set they were stuck that way, causing binding on the screws. In the photo above you can see where I used a dremel in an attempt to re-cut the clearance.

I also overdid it on the bedding job, removing wood to the rear of the rear action screw and applying epoxy. That area is not load bearing when the action is torqued down, and so should have been left free floating. That area has very slim contact between the stock and the action, leading to the epoxy sagging down and leaving gaps.

At the front of the action the issues were equally bad. While the pillars were in half decent shape (despite being tilted), there were a lot of places where the epoxy did not stay in place. Holes, bubbles, gaps, you name it, this stick had it.

Fortunately, the next time worked out a lot better.

While the original plan was for this to be a budget friendly build, it did not turn out that way. After the issues with the first attempt at bedding, I decided to just order a new stock. So much for my wallet.

In the end it was worth it though. The second time I did the pillar bedding I was much more careful with enlarging the action screw holes in the stock. That helped make sure they were accurately placed in the stock.

I also wrapped the action screws in electrical tape when epoxying in the pillars. This kept the pillars centered on the screws so that when the epoxy set and the tape was removed the screws did not touch the pillars on the inside.

In the photos the edges of the epoxy look lighter and rough. Those are just the borders where they were cleaned up with the dremel. You always have some overruns where the epoxy squeezes into areas it should not, but they get cleaned up once the action is removed and the epoxy cured.

After cleaning up the overruns of epoxy I re-sealed any areas of bare wood in the stock to prevent moisture getting in. With a 3-10x scope on top it was time to go to the range.

I tested for accuracy with the same factory ammo that I had used with the rifle as-purchased. Groups shrank down to a consistent 1-1/4″ diameter, with no stringing or change in point of impact as the barrel warmed. On trips into the field the rifle carried well, was durable, and held up in rain and snow.

The barrel I installed ended up being heavier than I expected, but it paid off in accuracy. With reasonably precise reloads (full-length sizing, thrown charges, etc.) groups are consistently 1-1/2″ at 200 yards.

As a first ever amateur gunsmithing project it went well. I certainly ran into problems with the pillars, glass bedding, and rework on the stock. But because the barreled action was so cheap to begin with the whole project still came in at less than $1,000.

Could I have gotten the same accuracy without this much work? Sure. Could I have had a rifle that was as effective for less money? Of course. But this rifle is mine.

I know every single screw and lever in the rifle. I have polished the barrel, smoothed the trigger, and headspaced the chamber. I started out with a rusty 1990’s action and turned it into a long range precision tool. There is no putting a price on the pride that comes with a project like that.