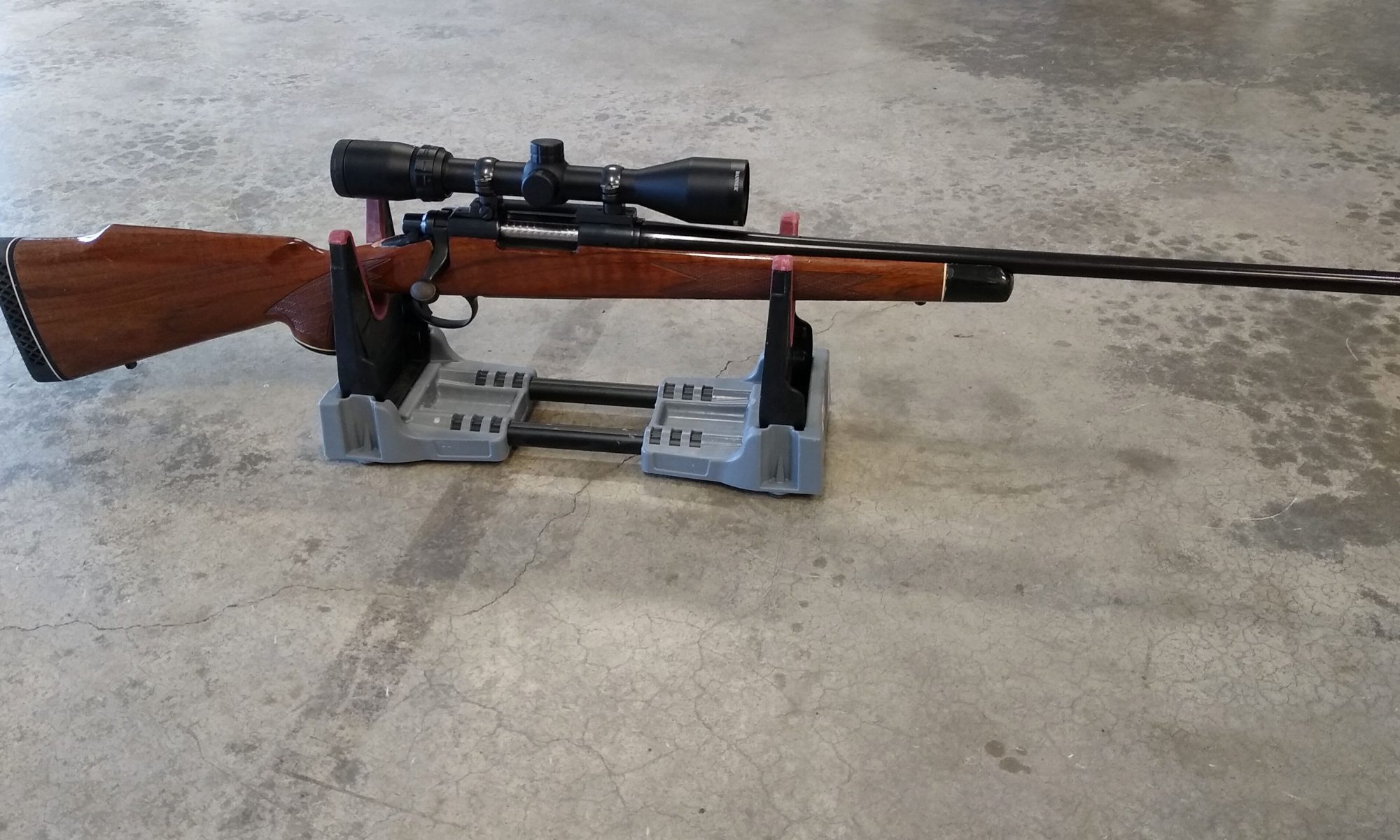 While I never have any shortage of projects, sometimes I don’t ask for them ahead of time. Sometimes projects just come to me . . . .

That’s what happened with Old School. This rifle is a 1980’s Remington Model 700 in 243 Winchester. This is actually one of my dad’s guns from back in the day. When I stole indefinitely borrowed the rifle it was in great shape, aside from needing a little oil and a quick bore cleaning. The rifle grouped well at the range: with factory ammo groups were a consistent 1-1/4″ at 100 yards. The clean metal, excellent condition of the bore, and medium-contour barrel were all contributing to good accuracy.

I was planning to take up hunting, and although a 243 is a little light for most Alaskan big game, it would be perfect for lighter critters like Sitka Black Tailed deer. But given that I’m not one to leave things alone I almost immediately started seeing ways to make a good thing better:

As I developed the plan for how to improve the rifle I kept in mind one overarching goal: to keep the outward appearance as unchanged as possible. In an age of kevlar stocks, anodized aluminum actions, and picatinny rail hand guards there is still a place for a classic design of walnut, cut checkering, and blued steel. Improving something does not always mean reworking it completely.

The final plan for the rifle was as follows:

The deep-cleaning and mechanical checks went without issues. The rifle was in good shape and so a little stoning of the trigger was all I did to the action. The trigger pull was not reduced, but the smoothness was improved. Bore polishing was also straightforward. I polish every barrel I own with JB bore polish. It reduces the micro texture of the barrel and leaves a much smoother finish that in an stock factory rifle. Cleaning is much easier with the bore polished, and the accuracy is unaffected.

With the basic parts of the project done it was time to really get dirty and start on the bedding. I opened up the action screw holes holes with a dremel and wood carving bit, being careful to keep the holes lined up properly.

I then cut the pillars to the correct length for the holes in the stock, being mindful of the curve one end which matches the curve of the receiver.

After removing the action and checking that the pillars had set properly it was time to do the glass bedding. I used a dremel with sanding drums to relieve wood from all areas where I would be adding epoxy.

I removed an extra amount of wood from the forend and plastic tip; that area needed room for both a layer of epoxy to seal the stock as well as an air space to keep the barrel free-floating. In preparation for bedding I added multiple layers of tape to the bottom of the barrel. Once removed, the tape would leave the desired air gap.

With the epoxy mixed, screw holes plugged with clay, and release agent applied, it was time for the moment of truth. I mixed the epoxy, spread it inside the barrel channnel, and seated the action into the goo.

A note on the process: the description I have included here omits some of the less interesting, but very necessary, steps like plugging the action with clay, test fitting, and determining how the pillars need to sit in the stock. Before attempting your own glass bedding job be sure to watch videos and read guides covering the whole process.

The glass bedding turned out great. The preparation really paid off: making sure there were no bubbles in the epoxy before seating the rifle, roughing up the texture of the wood to ensure adhesion, and taping or filling with clay any areas that had to remain free of epoxy. One area I had concern with was the forend cap. In classic 1980’s style the forend is made of plastic, to which epoxies often do not adhere.

Everything was reassembled, tested for safety, and taken to the range. With the same factory ammo as I used before the test, groups shrank to about 3/4″ at 100 yards. After further load testing I came up with reloads that hold 1-1/2″ groups at 200 yards. Not bad for a 30 year old factory rifle.

As a final step I removed the plastic butt plate and replaced it with a 1″ Pachmayr recoil pad. That would usually be considered a little over-squishy for a 243 Winchester, but I love it. The vented pad takes the recoil down from minimal to nearly nothing, even with 100 grain loads at near-maximum charges.

The end result was beyond all my hopes. The rifle kept it’s classic appearance, but was more accurate, more stable, and more weather-resistant than before. What would have been a nice, but forgettable rifle is now one of my most accurate guns. It is lightweight, light recoiling, and accurate. You can’t ask for more than that.