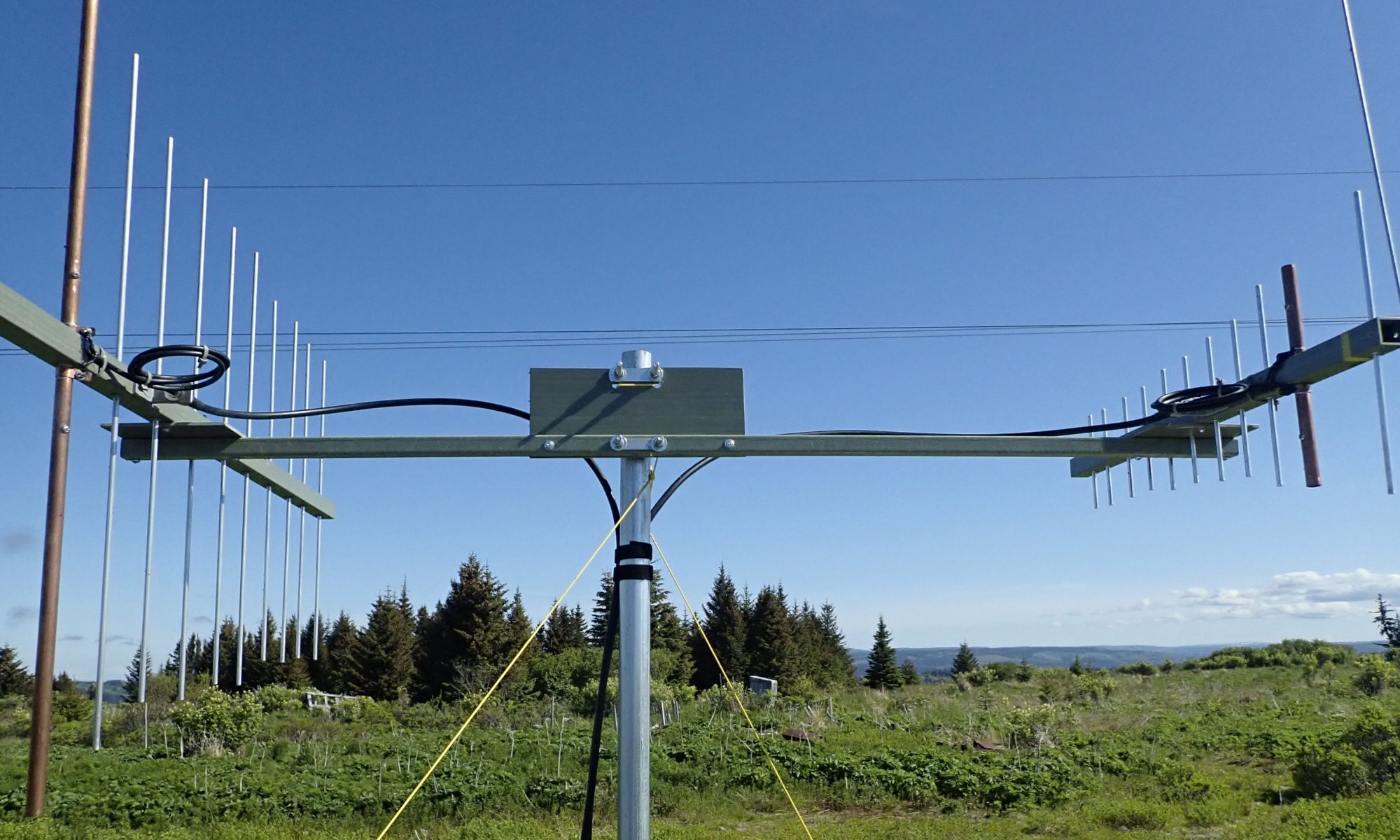 Ahead of this contest the Alaska VHF-Up Group had been working to build up contest activity. The response was steady and positive: each time we promoted an event we had more operators on the air, and more enthusiasm among them. For this event we felt that it was time to go all-in and attempt a two-day rover route. We called it correctly, and it paid off in a big way with record turnout, record contacts, and a record grid count for the rover.

My antenna stack for the event was my standard pair of Yagi antennas for 2 meters and 70 centimeters. These antennas are designs I created myself in 4NEC2. They use fiberglass booms for radio-transparency, 1/4″ diameter aluminum parasitic elements for durability, and a 3/8″ diameter copper dipole driven element.

The antennas are direct feed 50-ohm designs, so no matching networks are required. A simple choke balun made from a few turns of coax is integrated into the feed line attachment point. Each antenna covers the entirety of its respective band, so they can be used for any frequency without SWR issues or significant variation in gain.

Weak signal work (SSB, CW, digital, etc.) is usually done with horizontally-polarized antennas operating in the lower part of the band. In Alaska the 2 meter and 70 centimeter bands never open to “down south”, so that convention never took hold up here; all 2 M and 70 cm activity is done using vertical polarization.

BP51 was the first grid, operating from the corner of Alpweg and Meadow roads above Anchorage. This is consistently the best operating site, so I usually like to start off here.

The next location was BP41. The site I use is on the side of the road near Point Woronzof, and actually has a little bit of elevation above Anchorage. The elevation gain isn’t much, but it helps, and the RF paths to the Mat-Su (North) and Kenai Peninsula (Southwest) are good as well.

Over the years I have experimented with operating from the cab, setting up outside the vehicle, and operating in the bed of the truck. The last option seems to be the best approach since it gives me some room to move around and keeps the cab clear while I’m driving. The disadvantage is that you cannot make contacts while in motion, but for safety I probably shouldn’t be doing that anyway.

At the time I was using the setup shown above. The radios, meters, interface, and tuner are all mounted to a grid-like structure made of stainless steel all-thread rods and aluminum sheets. The entire structure is inherently grounded, keeps the gear together, and is much easier to work on that having everything inside a fully enclosed case.

After Point Woronzof it was off to Turnagain Arm for BP50. If you’re traveling by vehicle then you are limited to roadside turnouts along the ocean. One particular turnout on the Seward Highway offers a decent RF path back into Anchorage. The better-equipped Kenai stations can also be worked from here.

BP40 was the next stop, which I activated from a turnout on the Sterling Highway, just outside the town of Sterling. This location is marginal at best: you have some elevation, but there are higher hills that obstruct the view of Anchorage. Diffraction is iffy, but it does work if you have some gain.

Instead of heading home at the end of the day this trip was an overnight. I continued south to Stariski Campground, where I stayed for the night. This is a beautiful State campground situated on a high bluff overlooking Cook Inlet.

With the operating done for the day we moved the radio gear into the cab, inflated a mattress in the back, and passed out.

The next morning (Sunday) we got up early, ate a snack, and hit the road again. The next and final stop was Diamond Ridge Road, in BO49. The road provides a high point that sits above Homer and looks back into Anchorage. This was my first time activating this grid, and I was hoping more Anchorage stations would be on the air. Unfortunately most of the Anchorage crowd was offline on Sunday, and I only managed a few contacts in that direction.

Much to my surprise though, the Homer and Anchor Point ham communities came to my rescue. No sooner was I giving up on Anchorage when I started hearing weak signals I didn’t recognize. After I realized they were coming from Homer I spun the antennas around and quickly worked about ten people in Homer and Anchor Point, on multiple bands.

There turned to to be a bunch of operators who were interested in the contest but who were blocked by the hills above Homer. Putting the rover in position on Diamond Ridge road allowed me to reach them easily, and more contacts flowed into the log.

Finding this “reservoir” of operators was a great surprise, and a fun way to end the event. With the contest over we packed up the gear, took the antennas down, and headed into Homer for some much deserved fish and chips.