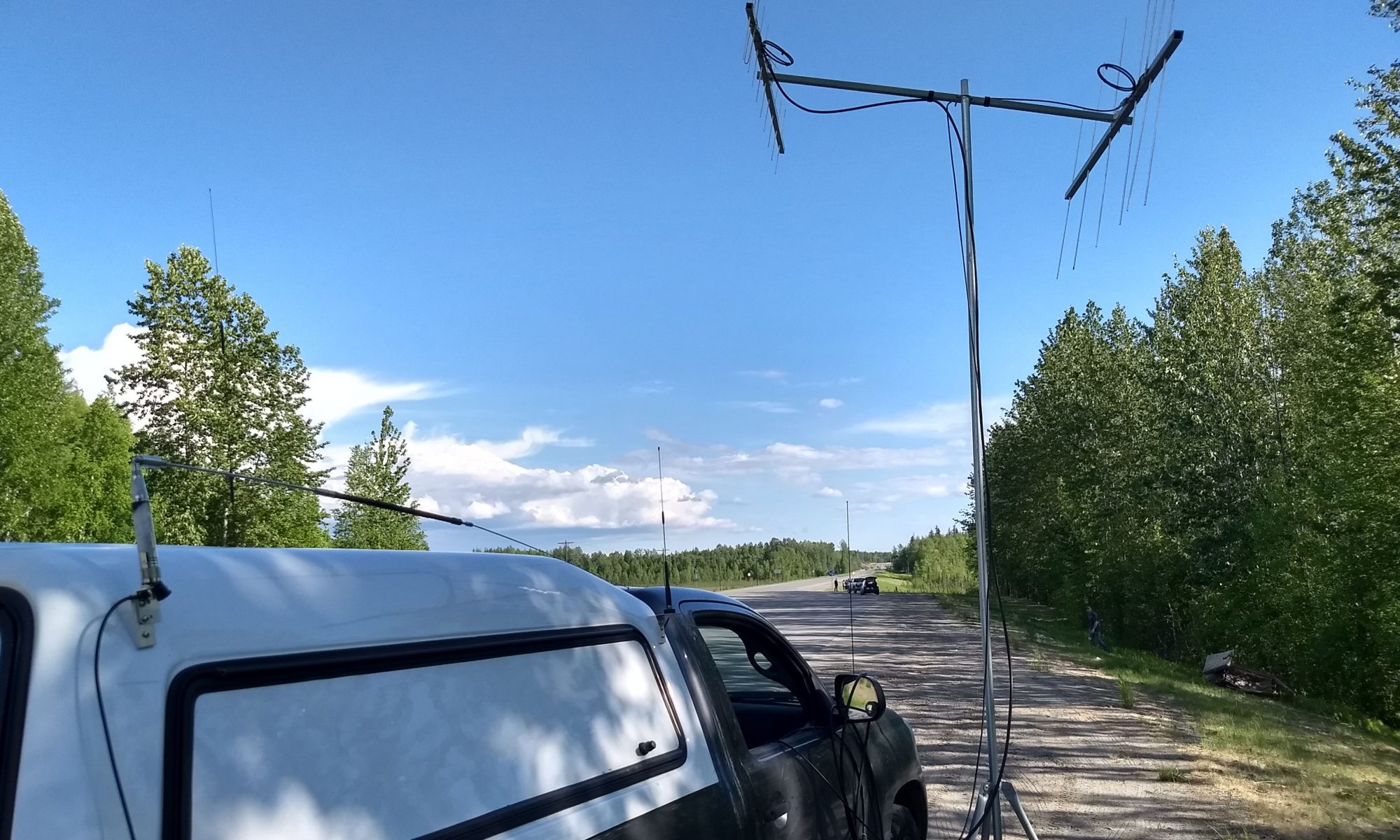 When I moved to Alaska I had to take a break from contesting for a while. But once I was settled in it was time to get back on the air. That presented some problems though – when moving up here I had to leave behind a lot of my bulkier stuff. Things like furniture, tools, and high gain VHF-UHF antennas all had to be sold or left behind.

That was just as well, because south-central Alaska is fairly limited when it come to high-elevation sites where you can get a vehicle in. Setting up a backpack-portable station is easy enough – you can hike to wherever you want. But vehicle-portable sites are few and far between.

It was time for a different approach: a rover station!

Traditional rover stations have the antennas mounted on a rotator, attached to the top of the vehicle. There isn’t any setting up or tearing down at each site – you’re always ready to go when you arrive at a new grid square. . . . I didn’t do that.

In my defense, I was very pressed for time in the lead up to the contest. I had to build new antennas, and getting them finished was the priority over getting a rotator setup working. My plan was to set up/tear down at each site.

I built two of the WA5VJB “cheap Yagi” designs: one for 2 meters and one for 70 centimeters. For six meters I was a little more limited for antennas. I used a loaded vertical antenna of the type commonly used on vehicles.

As a stopgap measure to get me in the game, I elected to build a simple drive-on mast mount. The mount uses a base made from two pieces pf plywood with a hinge. The lower piece is larger and is where the vehicle’s wheel is driven onto. The upper plywood sheet is smaller so that it does not end up under the wheel. With a tripod attached to the upper piece you can tilt the tower up or down as needed, making for easy setup in the field.

Everything worked as planned, except that the drive-on mount turned out to be very cumbersome. It was heavy, awkward, and time consuming to set up and tear down each time.

This kind of setup would be perfect for a “portable” entry, where you are not activating multiple grid squares throughout the day. It would also be an excellent setup for a special event station, or an emergency communications group. For roving through it left a lot to be desired.

There has long been a kind of “chicken or the egg” thing happening in Alaska with regard to VHF operating. With few people being active with weak signal VHF work, fewer people up here get started in it. With fewer people getting started, fewer people each year are active, and so on.

The overall effect is for there to be very few stations who have SSB capability on anything other than the HF bands. Most HF transceivers have 6 meter capability, but few operators have antennas for that band.

With such a small population doing weak signal work, most VHF activity is actually on FM, and you actually use the national calling frequencies to find contacts. Try getting away with that down south!

Despite the challenge of low activity the contest went really well. Quite a lot of other hams were looking for more activity up here, and putting the word out about the rover route was the nudge they needed to get back on the air.

This was also the first time trying out a new radio – the Yaesu 857-ND. With higher power than my Yaesu 817, this radio offered a much-needed boost in performance now that I was no longer operating from mountain tops.

I managed to activate about four grids on that day, with a lot of driving between sites.