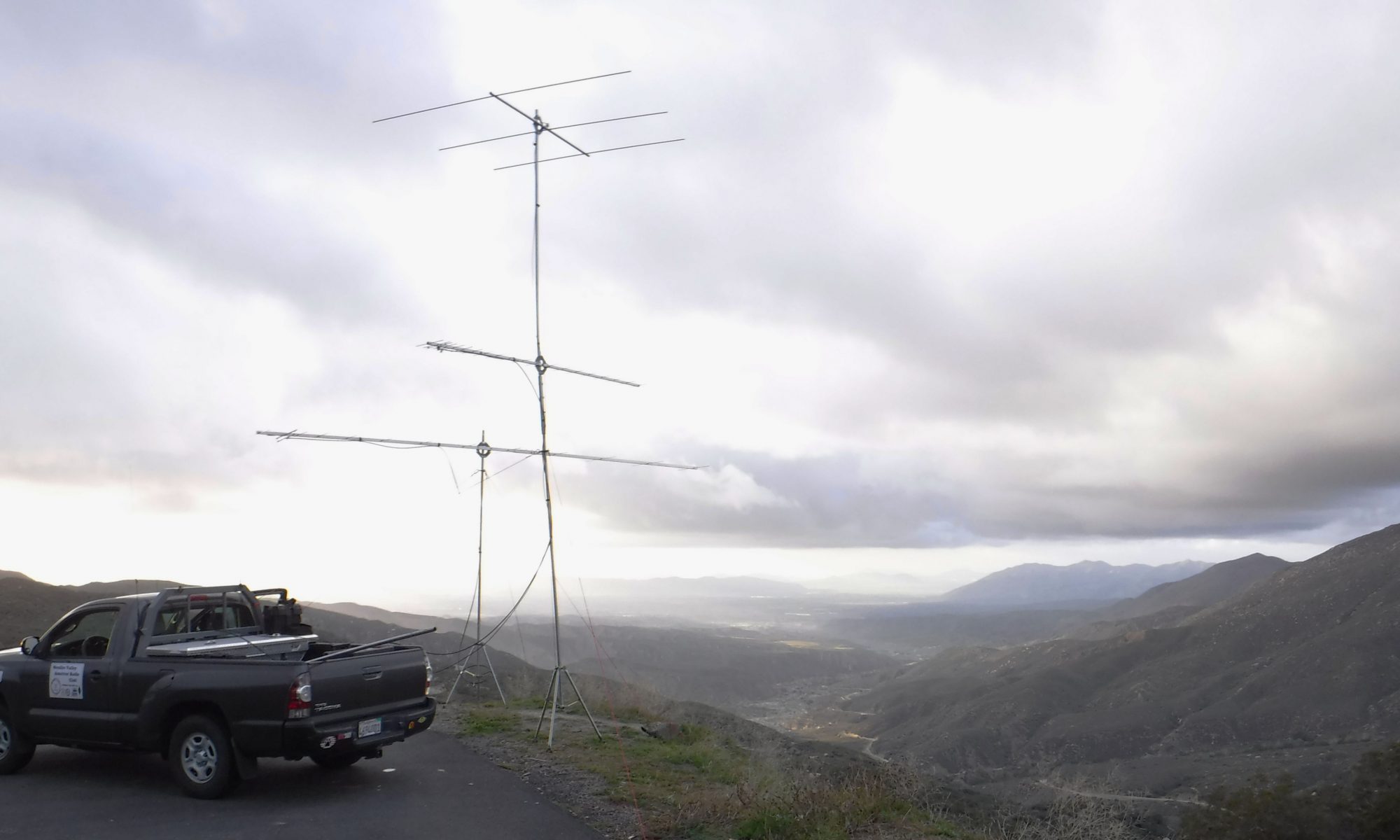 Such is the epilogue to many of my bold plans that turn into wild adventures, and this was no exception.

In the previous year I had made a tentative foray into contesting, setting up on a local hilltop with some basic antennas and making a few contacts. For this go-round I was much better-prepared. Antennas are everything in radio so I brought out the big guns . . . as in moonbounce-class BIG GUNS! Go big or go home, right?

The reason for the big antennas was my small radio – as in QRP small. I was broke and could only afford one radio, so if I wanted to also do Summits on the Air then the radio had to be portable. The Yaesu 817 fit the bill perfectly for that, but it left my wattage a bit underwhelming for VHF/UHF work.

I decided to make up for low transmit power by increasing antenna gain, which also fit the budget since I could build my own antennas to save money. On the air it makes no difference to the other person whether you are running 50 watts into an omnidirectional antenna or five watts into a directional one; you get a strong signal regardless.

I built two of the “High Performance Yagi” designs from an older version of the ARRL Antenna Book. The 2 meter version gave me 12 dBd of gain, and the 70 centimeter model gave me 13.2 dBd of gain. In practical terms, the gain with those antennas took my five-watt QRP signal and gave me a nearly 50-watt EIRP in the main transmit lobe. 6 meter antennas with high gain would have been absolutely massive, so for that band I settled on a three-element design.

The proverbial wheels fell off the equally proverbial bus when I tried to lift all this $#!t up into the air. With all-aluminum construction the antennas were very light, until they were swinging at the end of a 10′ mast. It took me over an hour of cursing, moaning, straining, groaning and dropping gear on the asphalt before I finally got everything up in the air. And when I did, one of my feed lines had a bad connector, so I had to do it all again after field soldering a new connector.

I was also testing other gear for the event. For power I had a new and improved setup, consisting of modular components: battery, inverter, cables, etc. With a quick plug/unplug I could run from vehicle power, any available battery, or any other available 13.8 V source.

My plan was to operate from the passenger side of the cab. That sort-of worked. The placement of my antennas was constrained by the small pull-out I was parked on, resulting in some of the feed lines not being long enough to route them through the back window as planned. Some of them had to come in through the passenger door, requiring the door to be left open.

Similar issues presented themselves on the power side, forcing me to set up the power plant on the ground next to the truck. That negated the benefits of working “inside” the cab, and left both my battery and me to get very chilly in the January air.

I carried on though, and kept things working as best I could. Another problem quickly showed up with my laptop. The battery at that time was going on five years old and simply would not hold a charge the way it used to – forcing me to run the AC adapter to keep the laptop and my N1MM logging software running. Converting power from a 12 V DC battery up to 120 V AC in an inverter is inefficient, at best. Converting the same power back down to 19 volts DC to power a laptop is just getting retarded.

These contests are usually quite busy in southern California. The airwaves light up like a war zone: portable stations run QRP from the hills, home stations zap birds out of the sky with amplifiers and beams, and rovers tear up the highways (and the occasional low-hanging sign) going from grid to grid. On that day . . . there was a whole lotta nuthin’ going on.

6 meters was the busiest band, as expected, with 2 meters and 70 centimeters coming in behind. Overall I think I only contacted about 15 or 20 other stations that day, which is extremely low for this area.

It was a day of antennas collapsing, feed lines failing, power disappearing, and operators despairing. By the end of it I was having fun, but the few victories of the day were all hard-fought. With all those problems how did I do? Well . . . I won, of course!

First place for Orange Section in the Single Operator Portable category. Read it and weep!

Despite all the hard-knocks lessons I learned that day and all the things I did wrong there were two things I did completely right:

The weather that I fought against kept some of the big gun stations out of the fight, and closed off some of the best operating locations. My compromise site and ramshackle station carried the day simply because I was stubborn as hell and stuck it out.

In VHF contesting you need a lot of power, a lot of gain, and a great location. Or you could just be too stubborn to quit and win by default.