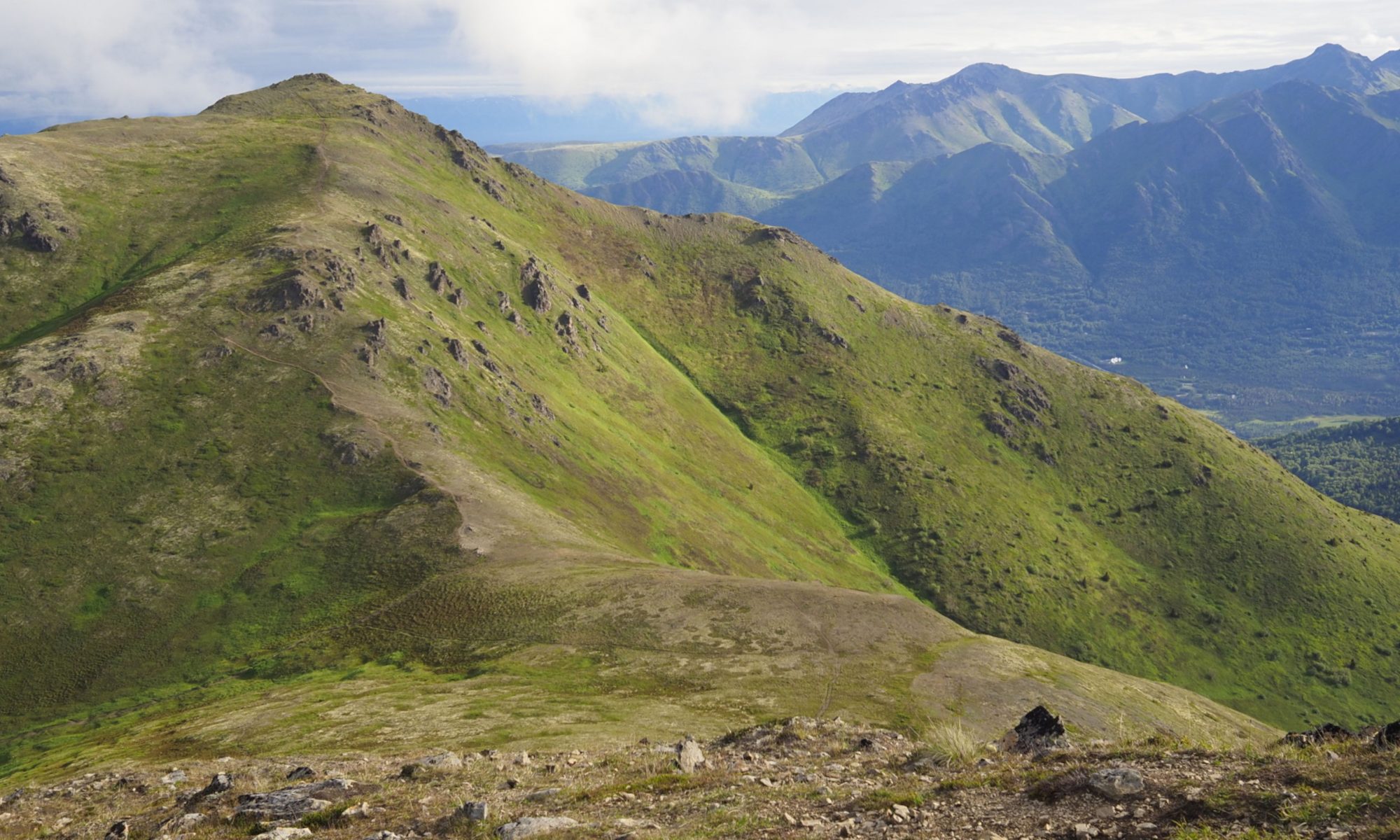 Sometimes you have a day where everything just goes the way it should. The sun shines, the breeze is gentle, the temperatures are pleasant, and the radio gods smile upon you with a bounty of contacts. This was one of those days.

When I went to activate this peak I was in the mood for just a simple activation on VHF. There is definitely a time to run HF and weak signal modes, but there is also a time to keep it simple and enjoy yourself without any pressure.

The gear load-out was light: just snacks, water, a rain layer for me, and a light radio setup. I took my Yaesu 817-ND, spare battery, and vertical fan dipole for 2 M and 70 cm. My plan was to time the ascent to be on top when the Alaska VHF-Up Group Saturday net was going on. That always makes for an easy way to get a few contacts and bag the peak.

In the map above you can see the route I took going along the right side. Starting out at the bottom, my route follows the ridgeline to the right and heading up the peak.

This is a popular area and the trail is in good shape. This route could also be done in the winter, but be prepared for avalanche conditions if you come during the solid-water season. At the start the trail is pretty level and you pass through some dense brush, Beware of bears and moose when in this area. I did not run into either, but when I started gaining some altitude I did see a moose on the opposite side of the valley going up and over. Moose may be tasty, but they seem to be aware of this fact and it makes them very mean animals.

Immediately after doing the U-turn mentioned above the trail goes up. As in, straight up. No warm up, no giddy up, no easy up. Just the “assume the position because this is going to hurt” kind of straight up that heads to the ridge.

Once I got through the straight-up section, the views were worth the trouble to get there. Looking south you can see into Anchorage and Cook Inlet. Looking north you can see in to the Susitna Valley, and even spot Denali if the weather allows. To get to the peak you just follow the trail along the top of the ridge.

The trail itself made for great walking. I gained some elevation as I went, but the incline was gradual and involves enough ups and downs that you don’t suffer any for the height you gain.

This peak and its brother, Mt. Gordon Lyon, make up the head of Arctic Valley. However, the trail up to Rendezvous (this trail) would also provide an excellent jumping off point for venturing further into the Chugach Mountains. The image above is looking east, and there are a number of SOTA peaks visible. A future trip will be to retrace this route to the spot where I took this image, and then venture further east into the mountains.

By the time I was ready for a break I was at the peak. After a quick snack, drink, and a few minutes to set up I was on the air for the net. 2 meter contacts to all of Anchorage are possible, as well as to better-equipped stations on the Kenai Peninsula. You can reach a decent portion of Wasilla and the Mat-su from here, but the mountains on the other side of Eagle River do interfere somewhat.

After the conclusion of the net I packed up and headed home. However, if you were so inclined you could get an easy two-fer out of this route. The image above is a view of Mt Gordon Lyon, as seen from Rendezvous. The saddle is a decent walk, but once you have taken the effort to get this far you may as well do both peaks. After activating MGL you would simply take the trail down the valley to get home, making a nice loop like. For me though, I had already activated MGL, so it was time to go back the way I came.