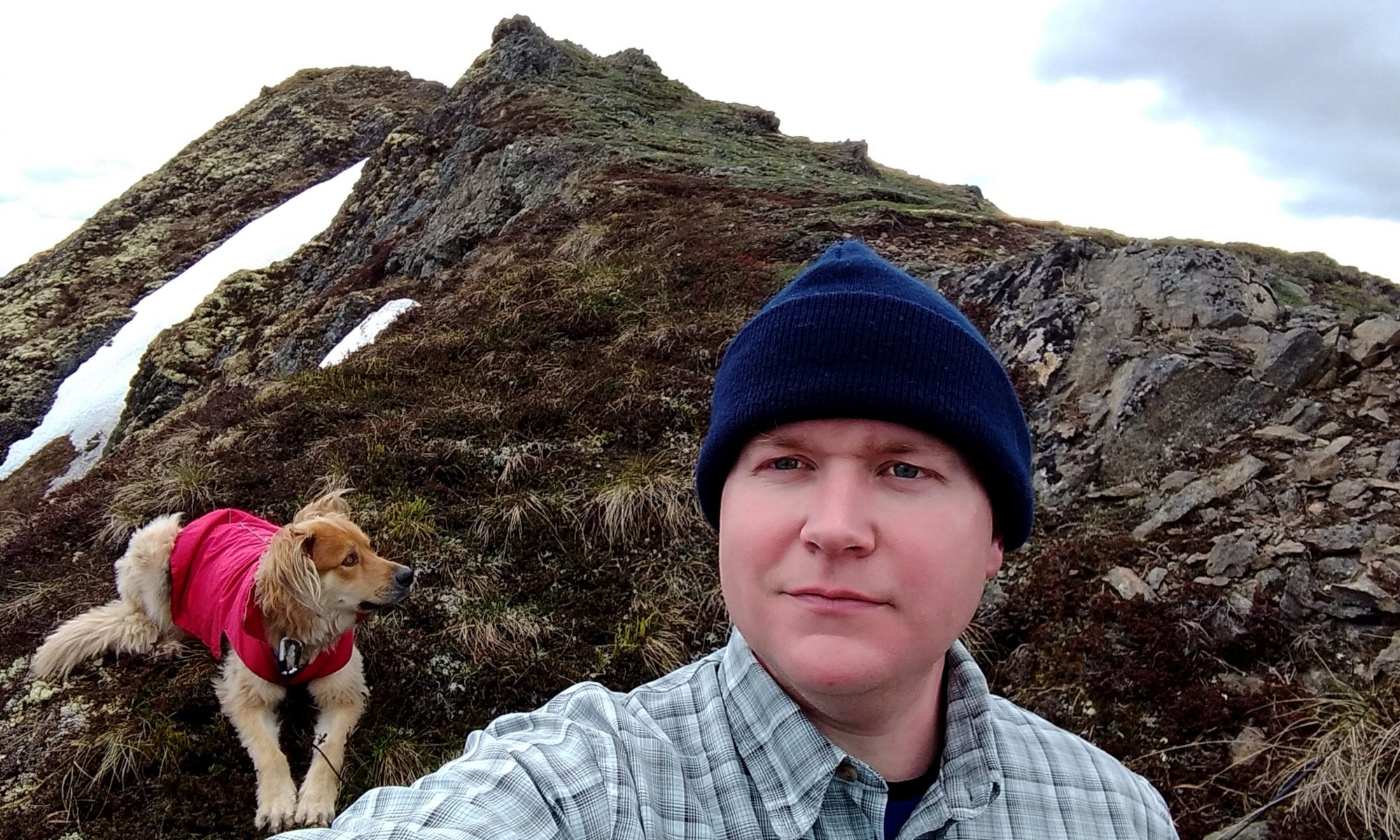 In 2019 I had just moved to Alaska and was learning hard lessons about activating summits. Back in California activating peaks was easy: with five watts SSB, a linked dipole, and a full set of balls I could make contacts all across the country. But in Alaska the game changed.

Mt. Gordon Lyon is a decent size peak that is up above the Arctic Valley ski area. In winter the valley is a popular ski destination, which turns into a hiking area in the summer.

The peak can be hiked in the snow, but you should be able to judge avalanche conditions and go with a partner who can recover your body, if needed. Since I was new to the snow I waited until the thaw to attempt this peak.

The trail was pretty average for Alaska. At the parking lot you are already above the treeline, so the terrain is mostly tundra. The trail up the valley is heavily traveled though, so after a rain it can get muddy.

Following the valley as far as it goes puts you on a saddle between two peaks: Mt. Gordon Lyon to the west and Rendezvous Peak to the east. The same route is good for both peaks, and in the past they have been done on the same day (not by me). Since this was my first peak in Alaska I decided to stick with this peak to start.

The weather was blustery with little patches of rain coming through, and I was not sure how long I would be able to stay on the peak. I planned the timing to coincide with the Alaska AVHF-Up Group’s morning simplex net, and made a handful of contacts on there to ensure the activation was secure.

With the pressure off, it was time to switch over to HF. For equipment I brought my Yaesu 817 ND, linked dipole, and MFJ fiberglass mast. The wind was picking up dramatically and tangling the lines of the dipole pretty badly. The mast itself was getting worked loose as gusts of wind wiggled it back and forth, making things even more difficult.

I finally did get the mast set up, but it was to no avail. After spotting and calling for a while I could raise no contacts.

From my old stomping grounds in California to the east coast states is around 5,000 miles, give or take. That’s a challenge for a QRP SSB station, but certainly possible (I did it regularly).

Also, there are a lot of stations between those two points on the map. Iowa, Illinois, Michigan, and other midwest states regularly answered my calls. Contacts more “local” to me were even more abundant; on the 40 M band the whole west coast was accessible, with over 50,000,000 people (and a lot of hams).

Running five watts SSB from Alaska is challenging, to say the least. If conditions are perfect it will work, but if the bands are not working for you then you’re toast.

From Anchorage, Alaska to Seattle, Washington (the closest of the lower-48) is already a jump of about 2,000 miles, and the only thing between those points is British Columbia – one of the lesser-populated provinces in an overall sparsely populated Canada.

In the end it was not meant to be. Perhaps the bands were closed that day or I picked a bad time of day, but HF was not my friend on that activation. I still managed to get the peak active by VHF, but it set in motion the realization that my techniques were going to have to change if I was going to work HF QRP from Alaska.