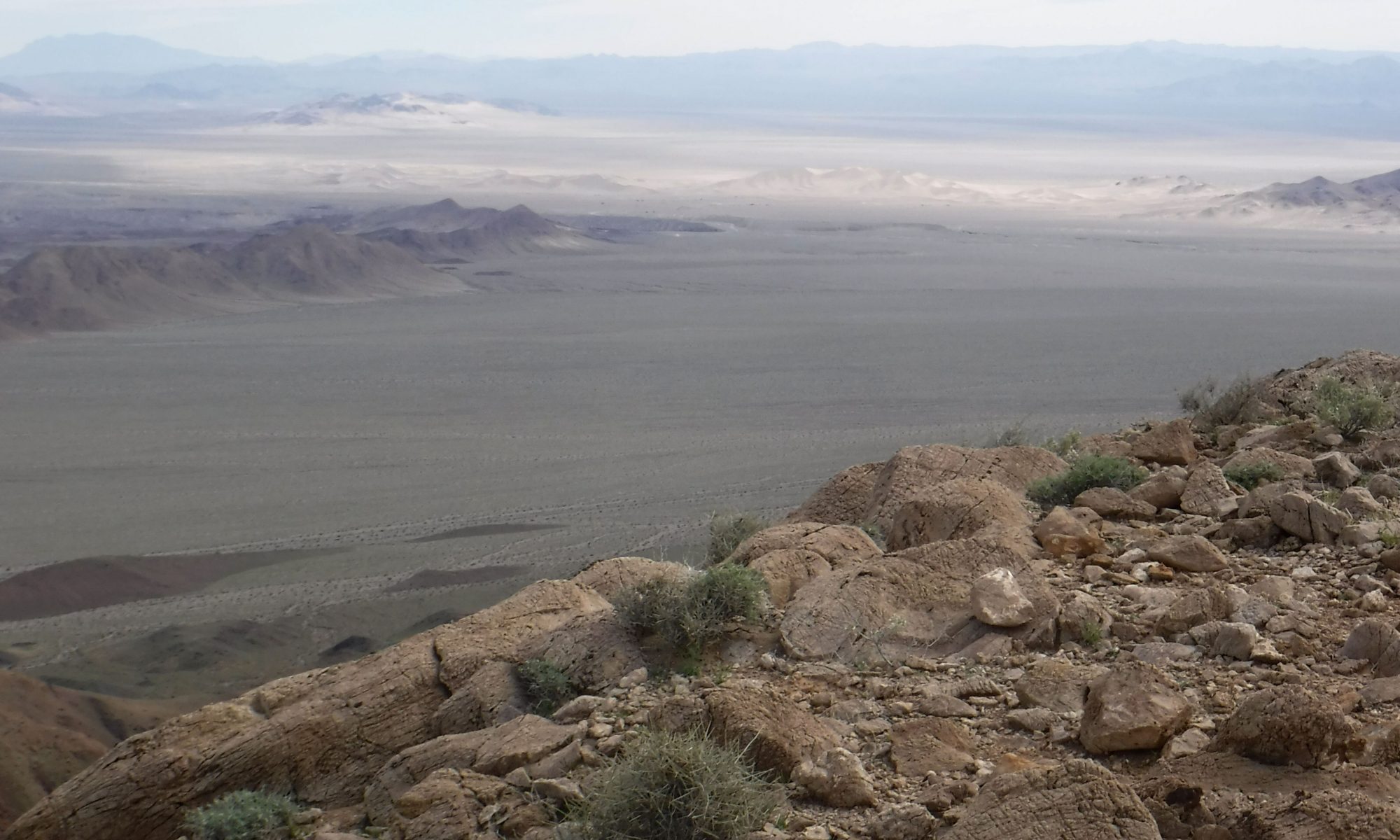 Ibex Peak is an isolated mountain in the south end of Death Valley National Park. Just a short time before I had activated another nearby peak, a few miles to the southwest. Like most of the peaks in this area, there are no trails to the top. Old roads and one highway cut through the region, but once you are on foot you are deep in the backcountry and very much on your own. Even the roads which do exist only see a few cars a week, at best.

The closest approach to the mountain was an old mining roads that skirts the mountain on the north side. After parking at the side of the road I packed up and headed off on foot.

There are a few ridgelines that all converge at the peak, but I elected to approach through a large canyon instead. The canyon made for easy walking and allowed me to cover a lot of ground quickly. After the canyon ran out I scrambled up a ridge to cover the last of the elevation. The hiking wasn’t particularly difficult, but did require a bit of scrambling towards the top. The rocks on the top were also extremely jagged and abrasive. I had to be careful to not lean my gear against anything sharp, and my boots were noticeably chewed up by the end of the trip.

Just about all of the peaks in this region are far too remote to depend on VHF for the activation. You might get lucky and pick up four contacts from mobiles passing on the nearest highway, but to even reach them you will likely need a portable yagi. This was going to be an HF activation.

The top of the peak is actually a very large, gently rounded area about the size of a football field. The tricky part was actually finding a place to secure the portable mast. I normally just secure the mast to some boulders with cord, but while this peak had plenty of rocks they all seemed to be about bowling balls to beach ball size – not the best for securing a 20′ mast. However, after a bit of searching for some handy rocks I managed to get the dipole up in the air and get started.

Using APRS to SOTA I was able to get a self-spot out. There are a number of high altitude digipeaters that follow the highways, and they come in handy from Death Valley Peaks. After a bit the contacts started rolling in.

Band conditions were good and I was able to reach up and down the west coast on the 40 meter band. After contacts on that band died down I switched to 20 meters, and picked up a handful of midwest and east coast stations, albeit weakly.

There is always a lot of satisfaction in activating a peak which has never been on the air before, and this was no exception. I didn’t have a ton of time to linger on the peak and play, but I still managed to get a decent haul of contacts for the log and put the peak on the air.