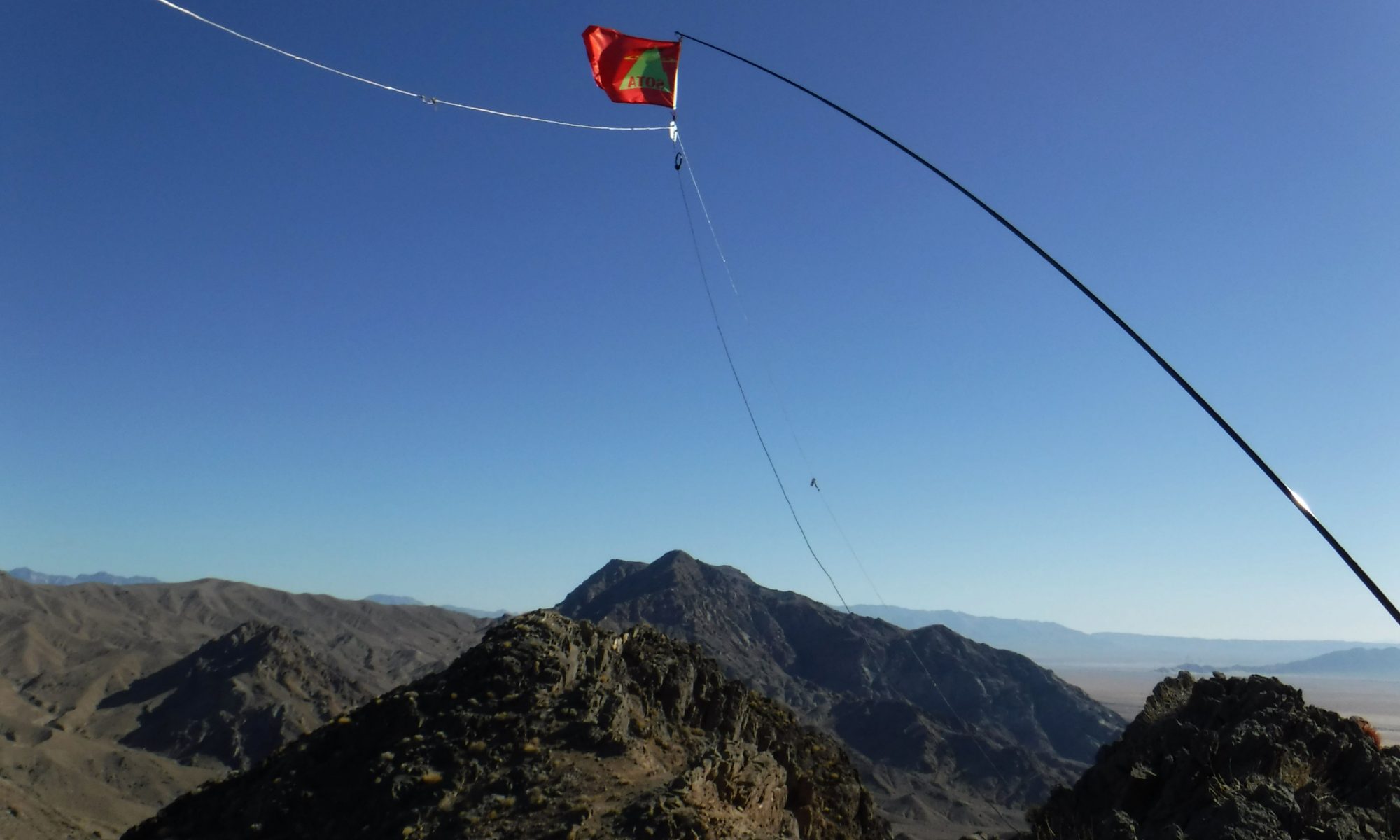 Getting to the top of a peak and putting it on the air is always satisfying. What is even more satisfying is when the peak has never been on-air before.

The most accessible peaks get activated over and over again, accounting for a lot of points on the SOTA scoreboard. But there are also a great many hidden gems out there – peaks which are more difficult, more remote, or just more out of the way than the more popular routes. Finding and activating these peaks is my favorite part of SOTA.

Mojave National Monument is a sprawling desert playground crisscrossed by old mining roads, 4WD trails, and goat paths. Our goal for this trip was an unnamed peak in the western part of the park, which we decided to call Cowpatty Peak.

To get to the base of the mountain we had to travel some of the back roads and approach the mountain from the west side. The roads were in pretty good shape, but travel carefully out there. One flash flood can reshape the landscape and the roads in an evening.

I had scouted a few possible routes ahead of time using available maps. None looked better than any other, so we headed straight up the canyon where we parked. The canyon led to an old mining service road that went farther up the hill, past some abandoned mine shafts, and eventually stopped about halfway up to the main ridge line.

From there we headed off-trail through the canyon. The whole area was made up of shattered boulders, so some boulder hopping was required to get through the pile. The trouble was worth it though when we made it out of the canyon and onto the final ridgeline.

Every once in a while you run into some interesting wildlife. On this trip, as we were hiking along the ridge we spotted something moving in the distance. It turned out to be some bighorn sheep, bouncing along the sheer rocks below the peak. As I was getting ready to get a photo or two, my dog Sledge spotted them as well and began barking up a storm. So much for the good photo.

Interstate 10 is within line of sight, so if you were inclined to wait you might be able to contact a few mobiles on the highway. That was a bit of a gamble though, so in my opinion HF was a necessity for this activation.

Once we reached the top I set up my fiberglass mast and linked dipole antenna. My transceiver of choice was my trusty Yaesu 817.

This was one of the best operating sites I have ever been to. There was absolutely zero noise on the bands – the noise floor was dead quiet. A few of my QSO partners were so faint that they didn’t even register on the S-meter even though their audio was perfectly readable.

The weather was perfect and temperatures were mild. After operating for as long as my hiking partner would tolerate, it was time to pack up and head home.

Although I was never able to return to the area before moving out of state, there are a ton of other peaks nearby which would make for great trips. The ridgeline to the south is capped by Old Dad Mountain, which I attempted once. Off to the west is another series of smaller peaks on a shared ridgeline which are also worthy of a future trip.